The closure of the Oyster River School in June 2016 is a glaring symptom of systemic and deliberate mismanagement of B.C.’s education system since the election of the Gordon Campbell B.C. Liberals in 2001.
The school at the south end of School District 72 (and also the south end of the North Island constituency) was opened in 1982 for elementary grades and when it was closed – reluctantly by school trustees – it had 78 students from kindergarten to grade 5, so it was not in an archaic building and had more than enough students to qualify as a normal rural school.
But of course it was not deemed that and instead was judged as an urban school, and so its added costs of about $4,000 per year per student were deemed too high and the trustees – under heavy pressure from the B.C. Ministry of Education to reduce operating costs – decided to close Oyster River School along with Discovery Passage School on the north side of Campbell River and instead pay to bus students elsewhere.
The main but not only problem is that the Campbell Liberals were systemically and deliberately underfunding schools in general and teachers’ wages in particular, the latter of which was recently found by the Supreme Court of Canada to have been an illegal practise – due to contract-breaking – but only after 15 years of costly and vexatious litigation by the B.C. Teachers’ Federation! And subsequently the Clark Liberals have claimed to be happy to deliver hundreds of millions of dollars in lifted funding to school districts. But of course the smiles are not genuine.
Why was the provincial government so nasty towards teachers? Because their members had dared to support the NDP against Campbell’s hyper-partisan Liberal oligopoly, and before them the parsimonious Socreds.
In any case, for that and other reasons [notably the Liberals’ vanity about balanced budgets] all school districts were under heavy pressure to reduce costs anywhere and everywhere, with ratio quotas applied such that low-population schools had to be closed or else district budgets wouldn’t be approved, and after years of resistance the Campbell River trustees finally bit the bullet and shut down Oyster River School – but only after years of resistance by area parents and the Strathcona Regional District representative Brenda Leigh, for Area D, and in fact their resistance continues.
Though the students now being bused to a school closer to town apparently are doing well in their new classes, area parents are still concerned at the closure of a nearby school that seemed to be functioning well, though it also was known that some teachers employed there struggled with the added stress and uncertainty and so learning environments were suffering too – from stress that originated from partisan downloading of spending cuts onto a small school in an area that just tends to vote NDP in a riding that regularly does the same.
As one parent told me recently, the absence of a school makes it less likely now that young families will want to move there, and that reduces everyone’s real estate values.
But another problem is that Area D rep Leigh and NDP MLA Claire Trevena apparently have failed to collaborate on efforts to try to save the school, such as declaring it’s a “rural” school rather than an urban one and so should be eligible for a somewhat higher per-student subsidy from the province.
So this travesty also is tinged with a lot of partisan politics, with an overly-partisan provincial regime happily hurting an area that tends to vote against the Liberals.
Statesmanship? Not regarding Oyster River School!
And sadly that partisan coloring of funding decisions also can be found and seen in health care funding, road and bridge maintenance and construction, tourism promotion and several other areas of provincial government operations, especially social services and seniors’ services such as the recent deep cuts in home care, and post-secondary job training.
The good news is that there has been a spurt of housing developments in Area D such that its building permits and population growth figures have been remarkably high, so it’s possible that there soon may be enough young students to support the reopening of Oyster River School, which presently has its doors boarded-up except for a small daycare operation now and still in there.
But that segues to another point, and that is that a more enlightened and less bureaucratic provincial government would have long ago engineered changes such that a facility like Oyster River School could be morphed into a new multi-use facility, perhaps for a part-time nursing station, maybe a bit of a community centre and maybe a seniors’ activity centre.
The problem there is that Ministry bean-counters and government lawyers quickly see things that could go wrong and then debate which ministry’s insurance could kick in, and how would they split the costs – with bureaucratic wrangling going on for years until the building itself decays.
No, what we see in Oyster River School closing is not merely an inevitable cost-saving but actually is another folly of false economies by insensitive partisan bullies riding roughshod over disorganized opponents.
And that’s an excellent reason why it’s time for a change on Tuesday May 9 voting day. 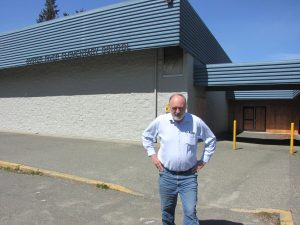